The foreword from the exhibition catalogue, Karas Gallery Studio, 1995

Only a dream you are (but in you a world slumbers), and its muteness speaks with your words…for they do not linger in one form nor dwell on what they build. (Octavio Paz).
Sculptor Peruško Bogdanić displays a high degree of powerful tectonics of sculptural thinking. His figures, chiseled directly into the stone of Vinkuran, are products of the imagination that lend themselves to the inversion of multifaceted variations of reading and enable us to penetrate and listen to an archetypal sexualized vocation, a specific phallic symbolism in which power tends to become mysterious, sometimes even lethal, shaped by a sphere/head at the top of the vertically composed mass.
However, in their exclusive verticality, Bogdanic’s forms are also cosmic trees that are humanized and become the symbols of a vertical microcosm, such as a man being tied with human destiny because a tree is a psychophysical totality of human individuality. A tree becomes a column, a column a statue, and each sculpturally shaped human form in stone is an interpermeating metamorphosis. The verticalism intensifies the image of resurrection and triumph. By its measure of time, it emphasizes the ambivalence of the cyclic symbolism of the esoterica of the messianic and resurrectional values, as well as the amalgam of the processuality of work. At the iconological level, German mythology and the legends of the Knights of the Round Table of King Arthur (Odin’s Mallet, Parsifal, Holy Grail, Lancelot) are but the matrices on which the shift from literality to creativity and from practice to aesthetic speculation will occur gradually, suddenly and concurrently. The shift is not solely felt in the pattern change but in the evolution of thinking, which does not (only) imply manual progress but also the twin activities of observation and realization, pointing towards new principles. Bogdanić is not a sculptor of irrevocably adopted formulas that would immobilize his expression. He creates his verticals in a certain order of “biological mutations” in which there is no transition from one figurative type into another. The mutation consists of defining a new form and discovering a new path that enables the creation of numerous forms in the limitless combinations of the variations of formal themes, interconnected primarily through the observation of nature and the encoding of the results of the observations into stone. A pattern from the field of the descriptive and the anecdotal has transposed onto the level of the pictorial.
The geometrization of forms, most often in perfect balance and symmetry, is only sometimes thwarted with gentle forays into the asymmetrical. However, surface textures’ simplicity and qualitative uniformity always go back to the pictoriality of the purified elemental originality, which successfully avoids being purely anecdotal in the final compositional totality. Such an approach is not unprecedented. On the contrary. Ancient Greeks chose to depict the intellectual elements of proportion that bring to human beings nature’s supreme law – the law of harmony, Le. the law of the concordance of parts which make up a whole. If it is possible to code the universe and if numbers express the secrets of nature (as for the Greeks), then absolute dimension does not exist and is an unimportant quality. Bogdanic’s earlier works: The First Heretic, The Second Heretic, and The Third Heretic, are, to a large extent, allusions to the streamlined form of the Greek column with a modified capital, where the shaft of the column is made of stone and the capital of bronze. They are much bigger than the recent works displayed on this occasion, which are diminished and subdued. In this manner, it is possible to augment or diminish every part of the universe without any significant modification on the condition that the relations among the elements are observed. The concept of quality is anchored in the idea of beauty which implies the belief in the unity of the universe in which Bogdanić’s sculptures have found shelter. The suggestions of calm overshadow the views from the end of a period labeled fin de siècle; the unknown exists with certain romantic restlessness. In such an atmosphere, Bogdanić acquires “another” archaic and exotic insinuation of thought remolded as a petrified tranquillity and revives in the matter the seductive anti-phantasms, without a trace of apocalyptic eagerness, grounded in rationality of the perceptual, tactile, and three-dimensional spatial sense of rhythm. Only occasionally, like in the sculpture The Cosmic Ear, does he invoke the future in the game of anamorphic perception. The concept of the alchemical transmutation of matter is revived, which contains a strong dose of an unforgotten tradition of the magic of sculpture, resulting in the perfect white purity elevated to the pedestal of a ritual, extolling the vision of the imaginative state that opposes the reality of the ambient. In this context, the works of Peruško Bogdanić can be read like an inner odyssey, a voyage through one’s privacy: history, ideas, memories, art, culture, thinking, and work through a continuous activity that was recognized and accepted for a long time ago in the communication with the audience, and often has, and rightly so, been on the receiving end of professional awards. 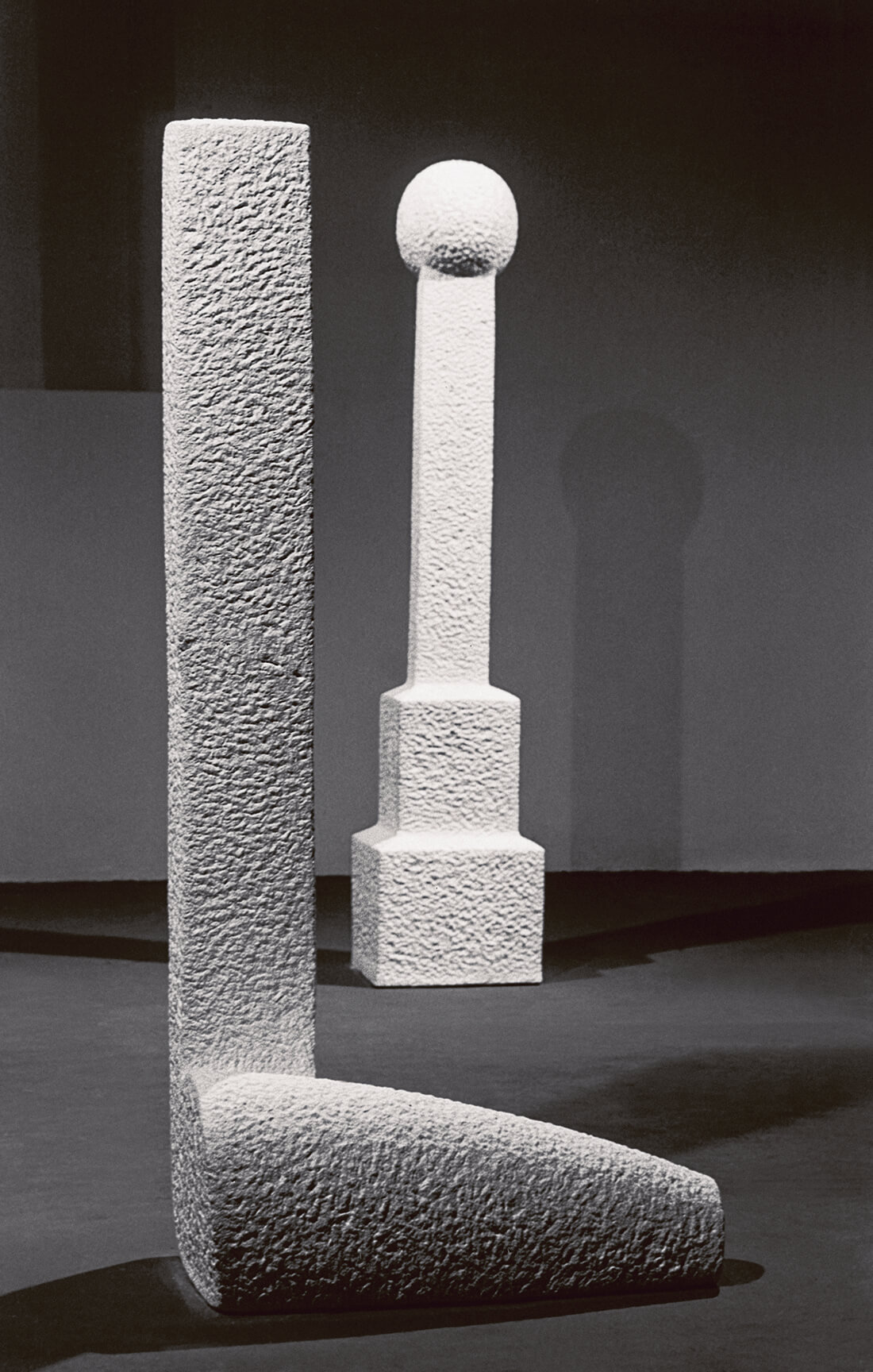 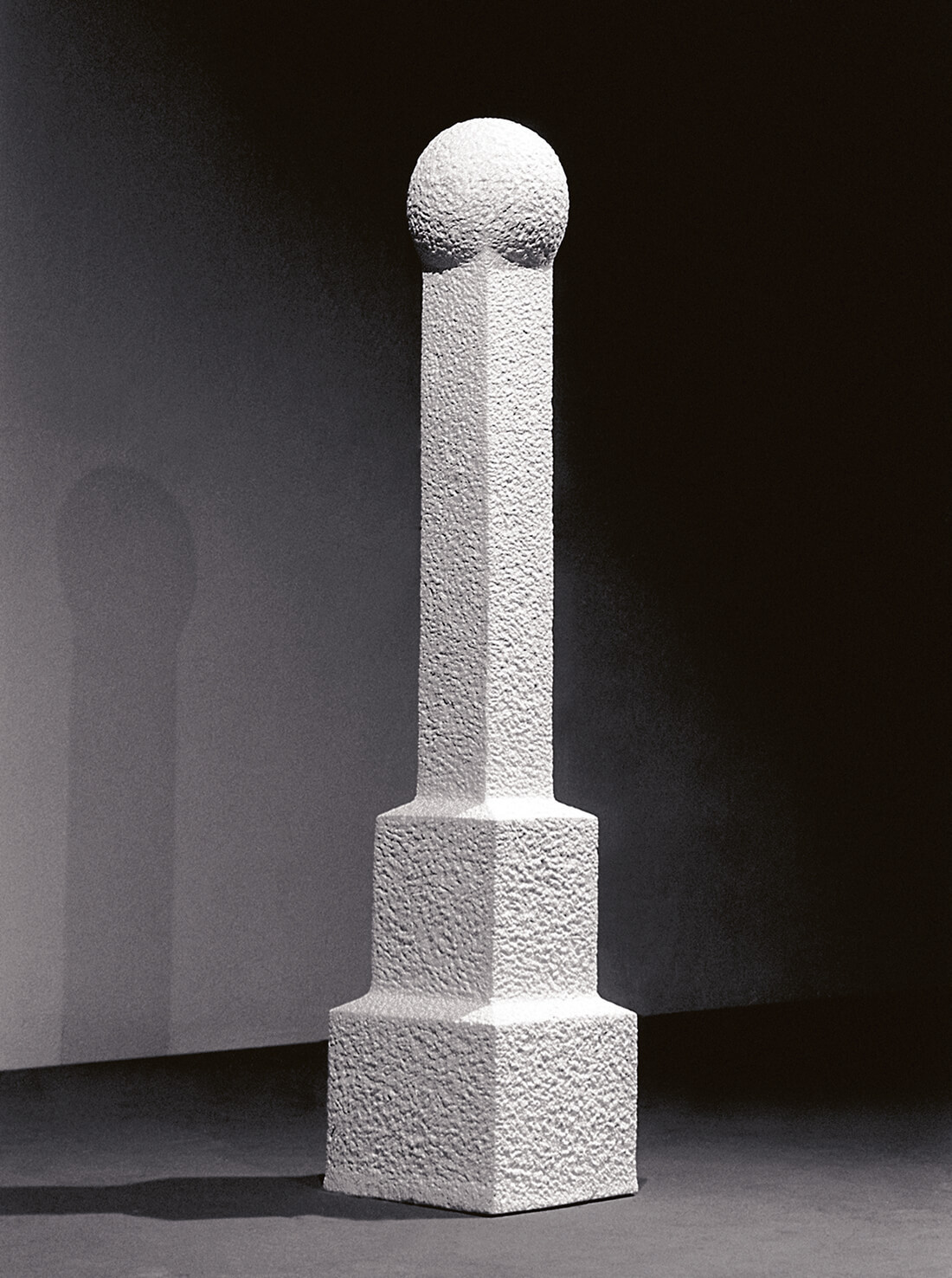 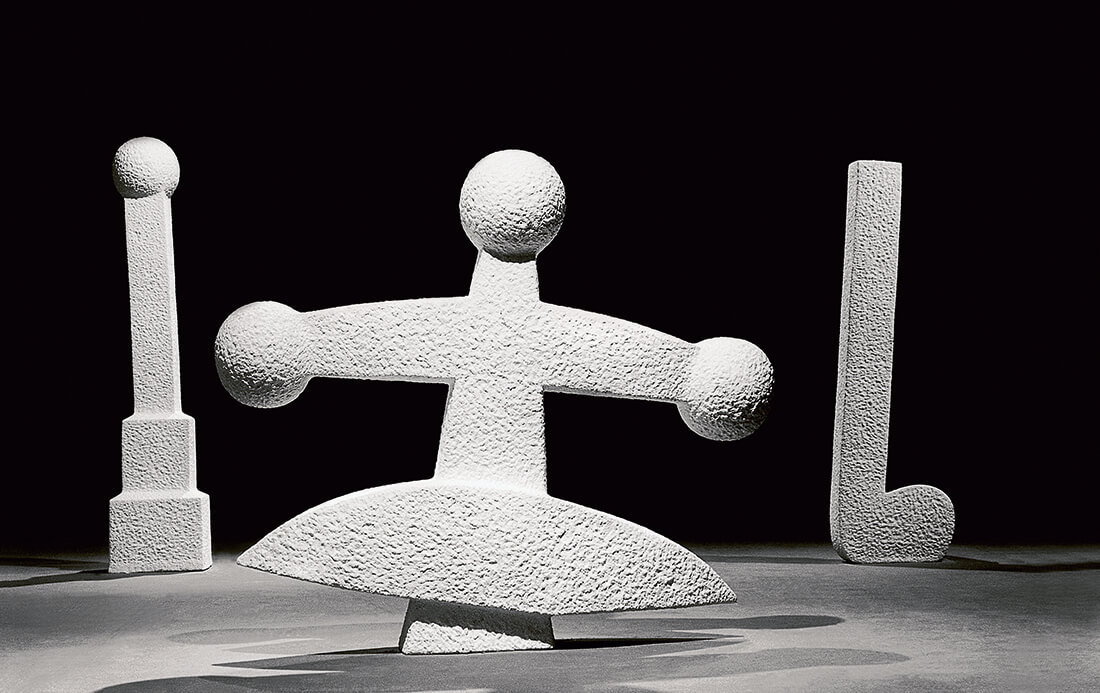 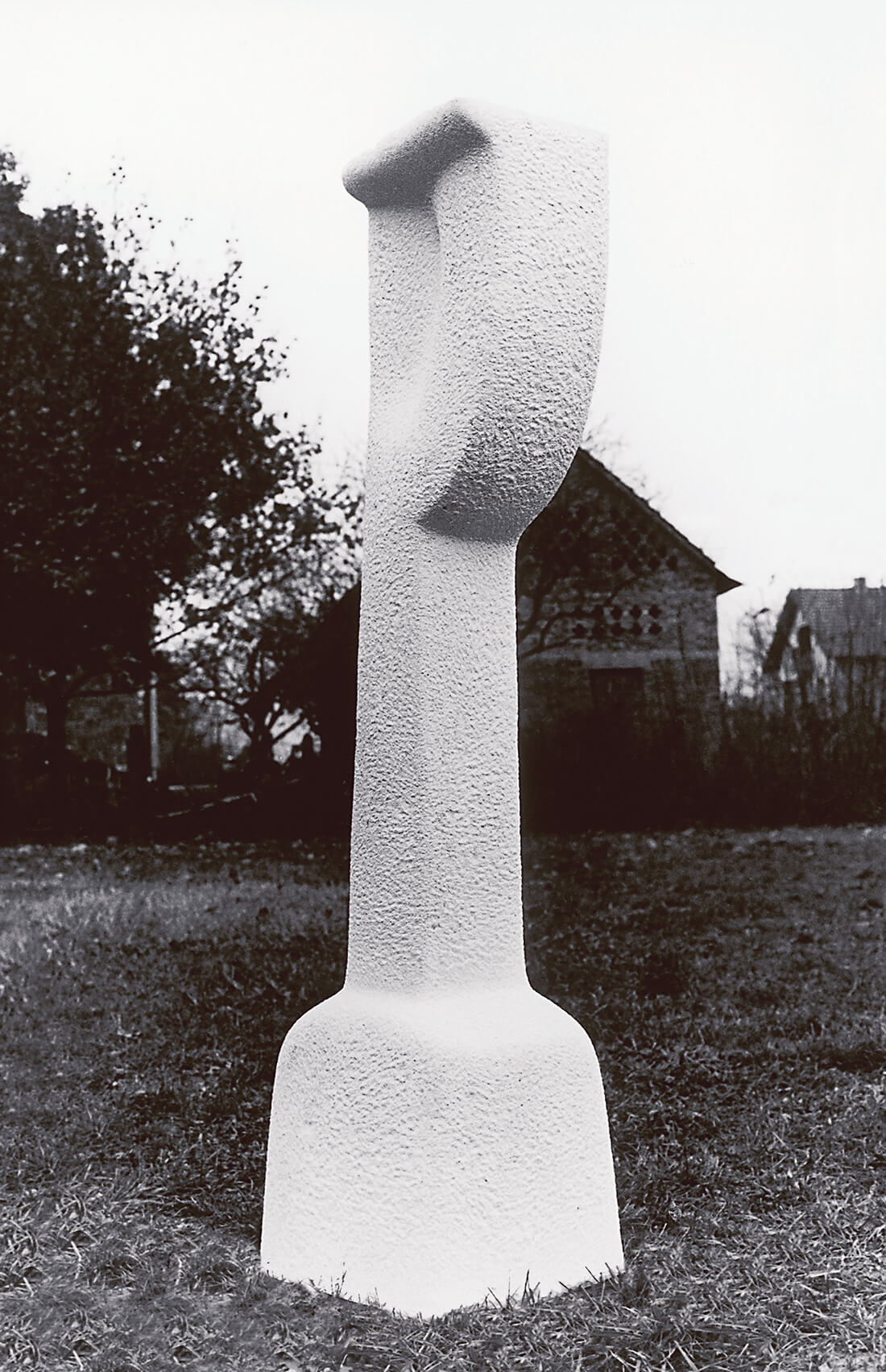 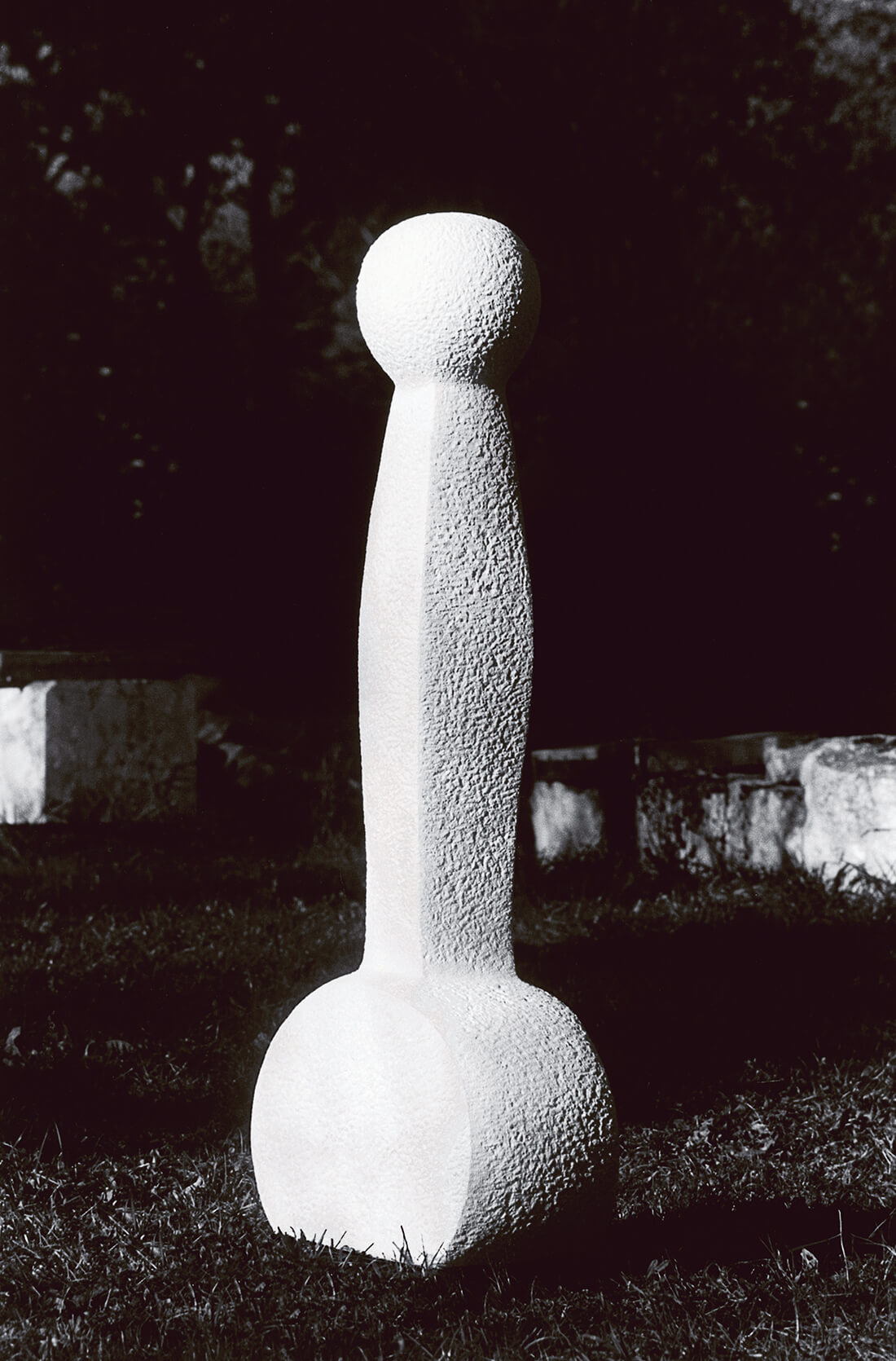