The foreword from the exhibition catalogue Saint Krševan Gallery, 1997

By vocation and training as a sculptor, Peruško Bogdanić has long since also tried his hand in and showed what he could do as a painter. His three-dimensional works built a recognizable oeuvre of primary and elementary characteristics. In contrast, he added light and colour to his symbols and signs in the works on two-dimensional surfaces. Although he started showing his paintings, mainly gouaches, a little later than his forms in bronze, stone, or wood, after fifteen years, the paper-based segment has become an essential asset, which has become a more than a welcome shadow of his freestanding sculpture, as a synthesis of the plan, side view, and ideal section.
In the beginning, the relationship between the statues and the paintings was much closer to the conjunction between the obverse and the reverse. Specifically, while the sculptures naturally affirmed tactile values and aspired to the straightforward, uncomplicated, and unambiguous outline, the paper frames revealed polyvalent structures, aggregates, and multiples of analogous particles – units and captured refined tonal gradations of colour. The content of the sculpture, naturally, is primarily volume and body, while behind the intention of the painting is the will to articulate space and the surroundings, “emptiness” and “air”. The gentle tones of Bogdanić’s gouaches have created flexible and supple intermediate spaces. They could appropriately function as a background or a place for projecting energy forces from the set core.
The most recent cycle establishes somewhat different relations between plastic and colouristic interpretation of visual phenomena. The epidermis of the plane is equally subtly shaded, but now the solid and unique forms of clear spatial extensions and suggestions of volume come to the fore. In the slightly diagonal and certainly more freely understood perspective, there are static, massive
blocks of some imagined architecture and emerging out of the neutral infinitude are semicircles and hemispheres, marked with solid edges and indicated with some rudimentary system of longitudes and latitudes.
We might call this series “domes” or “calottes” and accordingly burden it with associative commentaries, talking about the earth or the turtle, the tent or igloo, parachutes, pavilions, and elephant’s feet. But irrespective of such a literary superstructure, forms exist in their clean and thoroughly thought through systematic representation. In one of the works that, even if it is not the first, we can think of as formative, it is as if the strokes and lines are still seeking a definitive “crystallization”. On all the other surfaces, the idea of a closed, rounded form is methodically implemented and varied in not very large but justified and logical shifts. We should not be surprised if the elaboration of the same motif continues in some other materials in three-dimensional, heavy, and tactile volumes.
In any case, on this occasion, the sculptural thinking and sculptural drawing of Peruško Bogdanić have found another stronghold and another way to connect with the colourist experience of the painter. The cycle of “domes”, however, has a markedly autonomous meaning, its balance of restricted and geometrical, pronounced harmony of light and dark, a specific dynamics of the total and empty, and a “parsimonious abundance” of the distinctively unique colouring. In a word, a strictly controlled step forward is a phase in an increasingly more individual adoption of some originating world of a particular archetypal phenomenon. 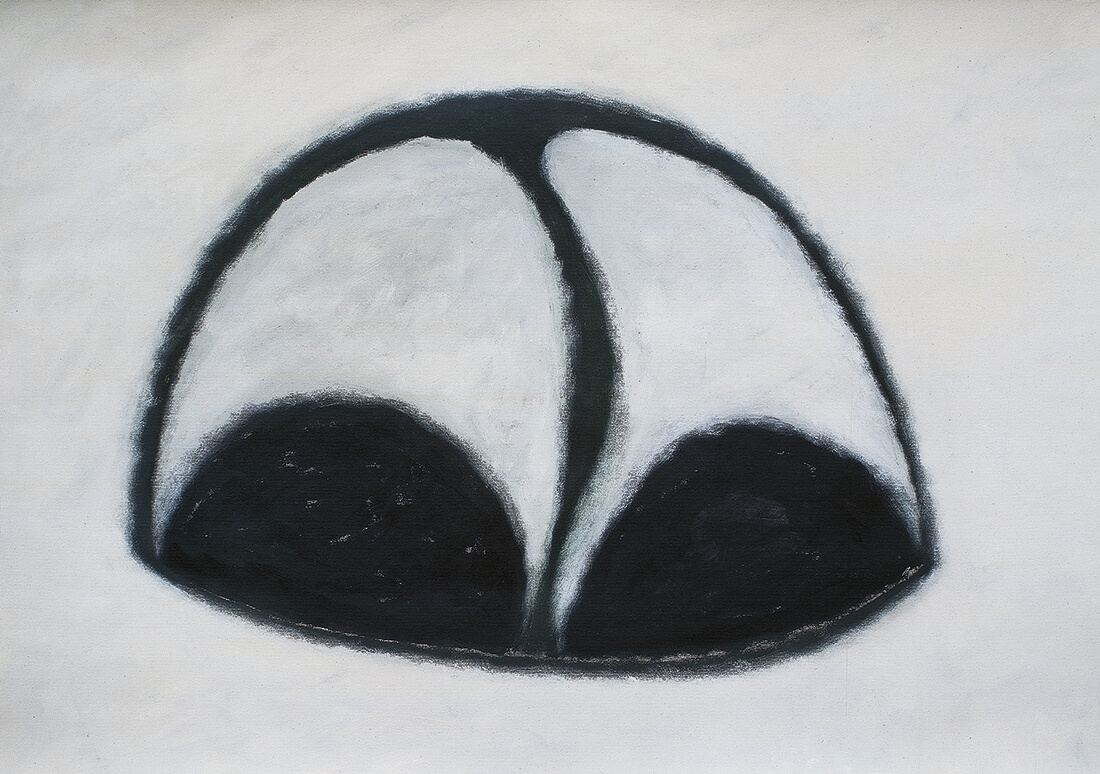 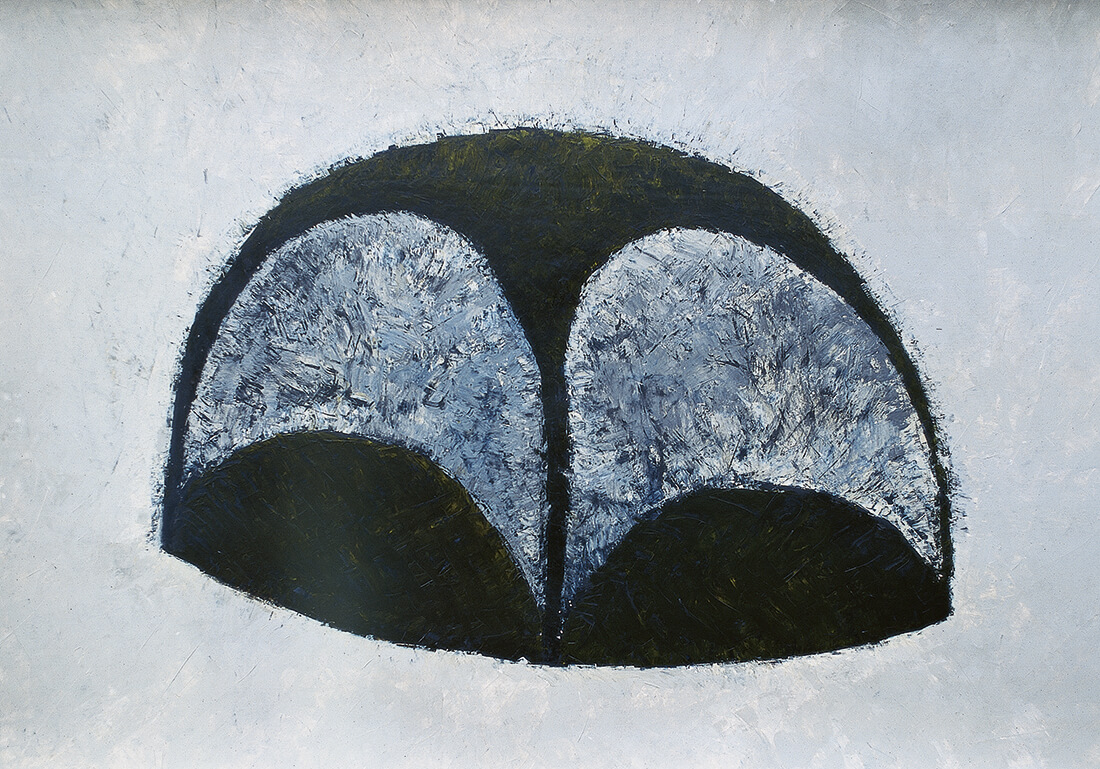 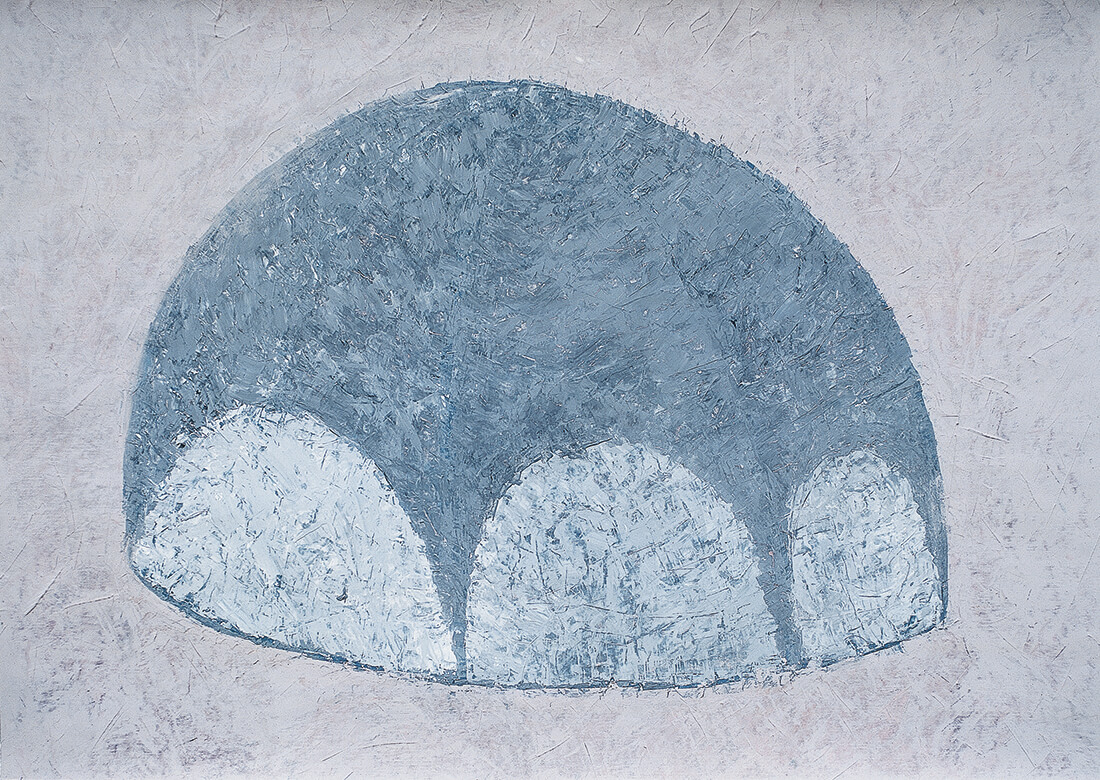 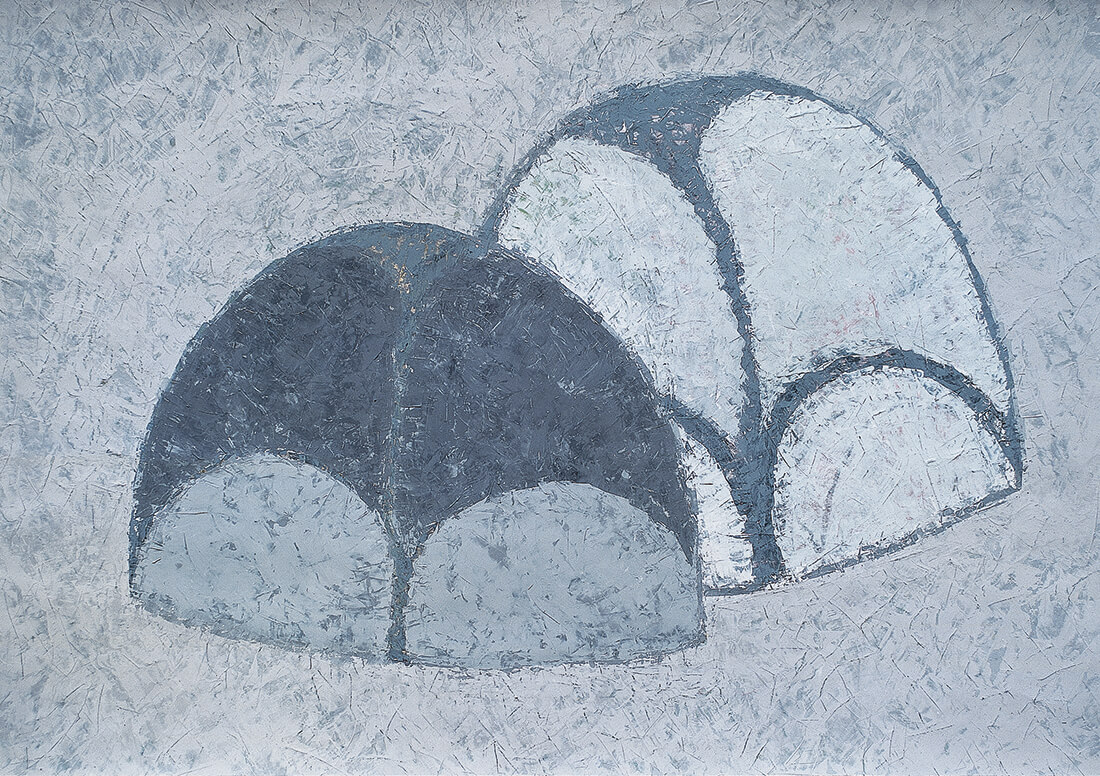 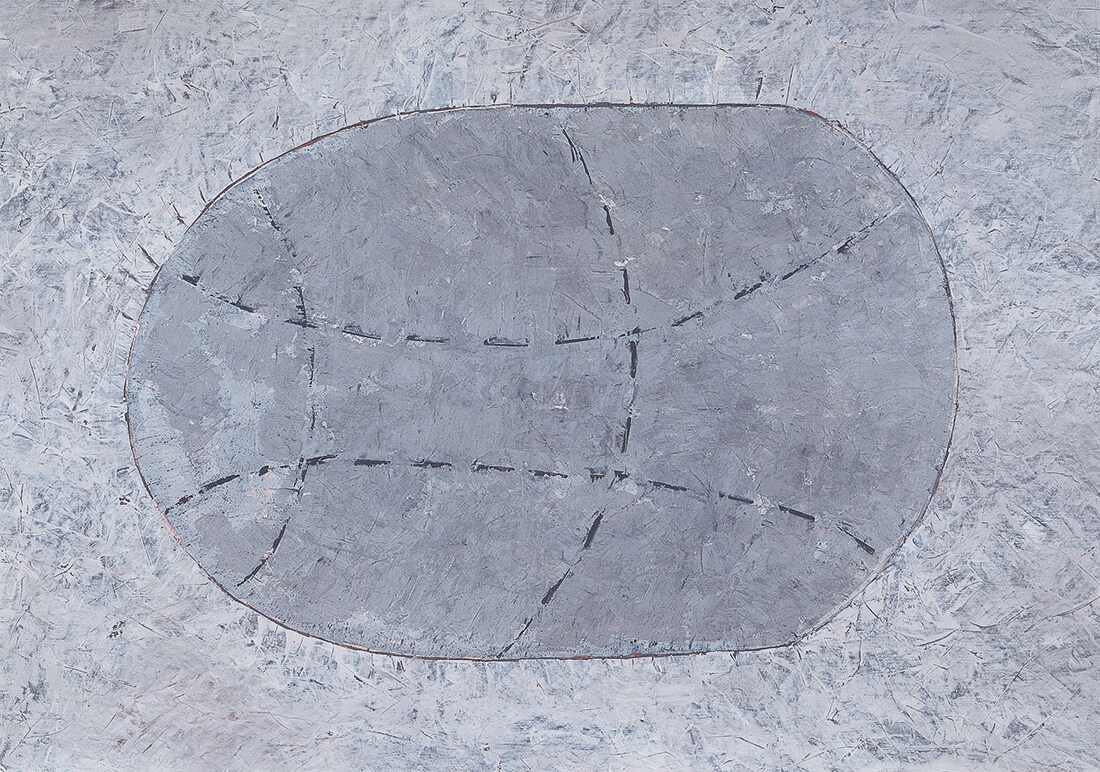 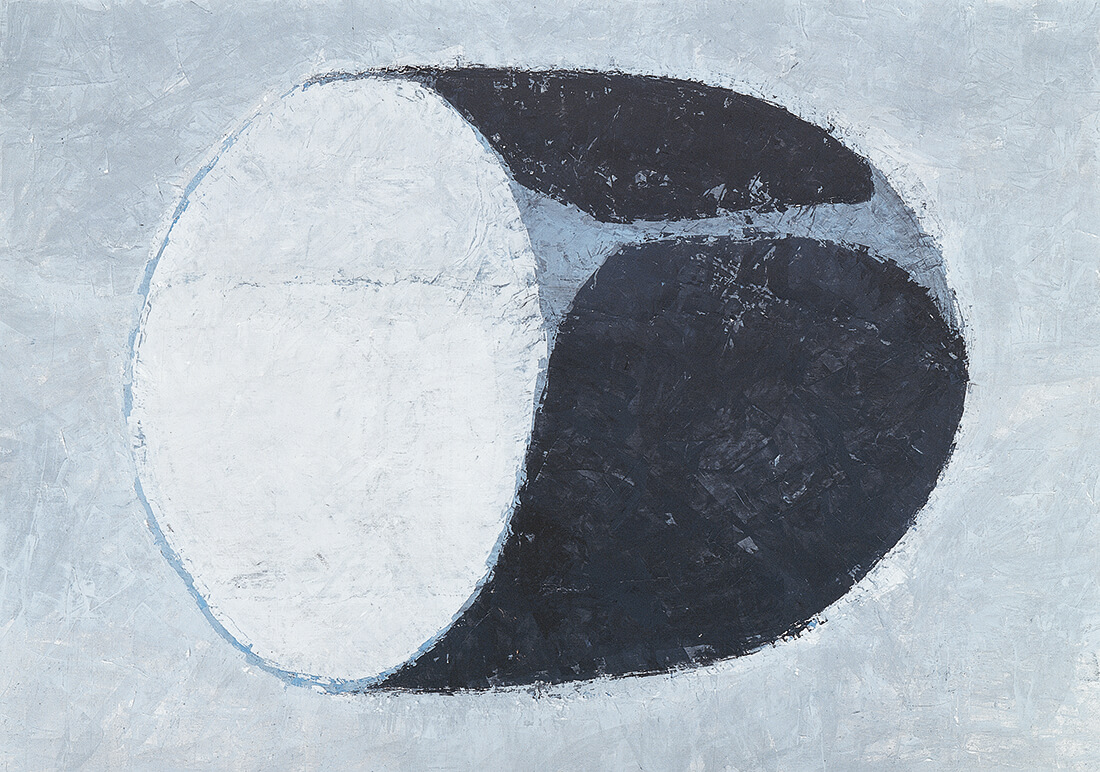 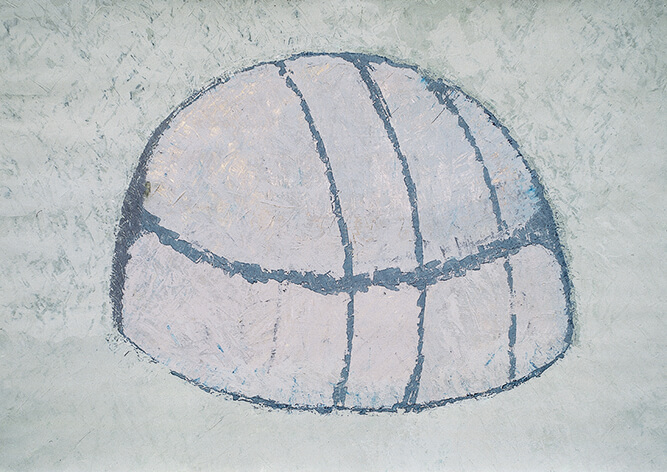 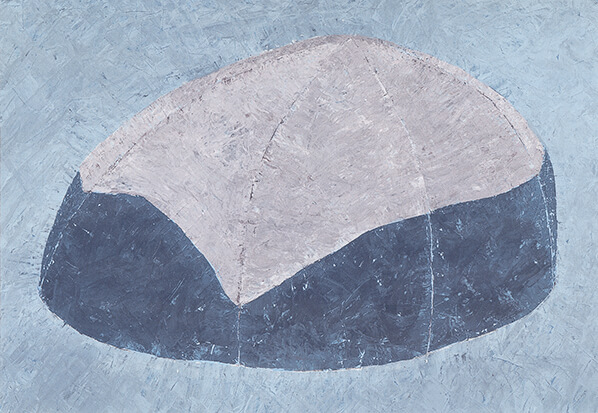