However, the situation in which Bogdanić found himself at the beginning of his career is complicated by a series of extra-artistic circumstances specific to the post-war socialist society, which, despite its relative openness and liberalism, lacked a particular type of cultural experiences and theoretical explanations, which served as support relatively ” smooth” adoption of the postmodern perspective in other European environments. In addition to rejecting the direct influence of theoretical or philosophical narratives, the consequence of such a state of affairs is a kind of resistance to “militant” forms of innovation and experimental approach to art, which we note not only in the sculpture of Peruško Bogdanić but also in a noticeable number of other sculptors of his generation. Instead of a more distinct analytical engagement with the linguistic aspects of the medium and the very act and process of shaping the sculptural material, most of them will choose irony, playfulness, and a Nietzschean type of superficiality, which – although it celebrates the visible, tactile and organic – does not allow one to lose sight of the instability and aporia nature such poetic decisions. However, from this perspective, the stylistic techniques of postmodernism are necessarily indicated as a derivation of the fundamental features of modernism, and the postmodern state itself as a kind of continuity of the modernist paradigm in circumstances of complete ideological and ideological exhaustion, which, does not leave any real possibility of innovation. Since everything that could be done has already been done, what remains for the postmodern artist, including the sculptor Peruško Bogdanić, is to play with pieces of the past, rearrange and combine them into new forms with full awareness of his position, which is no longer the position of the original, a unique and unrepeatable artistic subject of modernism, but rather the position of a collagist who, with a high degree of self-reflexivity and the application of specific symbolic and allegorical schemes of the previous period, reorganizes and recycles the debris of cultural history. Instead of structure, order, continuity, and causality, we are dealing with postmodern discontinuity, indecision, randomness, and unpredictability. Acutely aware of his play with formal elements, determined by the density and limitations of the chosen medium, Bogdanić, therefore, grounds the legal nature of his art in the process of aesthetic creation, which he openly defines as fictitious and artificial. Without departing from the framework of mimesis but rejecting the realist principle as an unmediated reflection of the subject reality, he will use the formal and technical aspects of the medium to emphasize the meta-fictional character of those remaining narratives in his sculpture, and in that way – convince us of his complete awareness of the fine line between convention and self-irony on which it constantly balances.

Playing with the structural elements of the medium, with the appropriation, quoting, and often a witty combination of the formal solutions of his predecessors, therefore results in a type of invention that allows us to mark Bogdanić’s sculpture with Foster’s definition of “reactionary postmodernism” – eclectic and affirmative about the status quo, the one that he consciously renounces radical criticism of the modernist project, in favor of pure pleasure in a free, non-paradigmatic involvement, both in the design traditions of the domestic environment and in the history of European art. Along with relative indifference to social reality and orientation towards aesthetic play within the limits of the chosen medium, this very “reactionary” point of view is one of the fundamental characteristics of Bogdanić’s oeuvre. This also confirms our thesis, the latest cycle of his sculptures – a kind of pastiche of minimalism, which, although only seemingly, tries to make an inevitable shift from visual perception towards the physical experience of the sculptural form. Why minimalism, and why do you fall? While the answer to the latter question is offered not only by the poetic choice of this artist but also by a considerable number of his previous realizations, the choice of minimalism as the historical reference for his recent series of sculptures requires a somewhat more complex explanation. Namely, minimalism is undoubtedly one of those meaningful experiences that Croatian modern art lacks – a kind of “lost link” in the chain of theoretical and poetic distancing from the local formative traditions of modernism, and – judging by the formative phase, not only of Peruško Bogdanić but also of most the sculptor of his generation – a kind of constant fixation of a particular group of contemporary sculptors, which constantly tackles it again and again. The fact that the absence of minimalism is not only a local problem of Croatian modern art, and that we encounter a similar situation in many other European environments, and due to the specific configuration of European modernism and its very complex relationship to the question of its continuity, is less critical in this case, but perhaps additionally explains the reasons for Bogdanić’s choice. At its base, there is undoubtedly an element of personal fascination, which is confirmed by part of the earlier sculptural production of this artist, although only on a formal level and without a real effort to incorporate the poetic determinants and stylistic orientation more firmly into his sculptural practice. Why is the pastiche, and isn’t such a qualification still too critical, especially if we keep in mind Jameson’s explanation that this process of parodying and imitating frees all historical content and its initially humorous potential? Considering Bogdanić’s conception of the cycle in question, the meaning of the term pastiche, in this case, is much simpler and implies both an homage to a specific type of sculptural practice and its free reinterpretation within the framework of the local environment in whose experience it exists as a relatively vague, primarily theoretical concept applied to a vast and utterly incoherent corpus of artistic realizations. The “imitative” aspect of Bogdanić’s work includes, on the other hand, only a few formal and superficial elements of minimalist poetics, primarily at the level of the apparent “schematic” of its structural elements, that is, at the level of their presentation. The history of art teaches us that “classic” minimalist realization almost always implies a group of identical geometric volumes, which function as objects in themselves, and that their spatial accumulation creates a particular ambient situation, whose phenomenological implications require a specific type of viewer’s response and his full awareness of his physicality. The absence of any meta-narrative content, and the primary focus on physical, not emotional or intellectual reaction, served, after all, as the basis of radical criticism of minimalism from the position of formalist criticism but also as an essential step forward in the process of critical departure from the artistic discourse of high modernism, to which Bogdanić only partially agrees with this cycle. Instead of the seriality and anonymity of minimalist sculpture, we are thus dealing with a kind of ensemble made up of twenty vertically elongated, multiple individualized sculptural forms, transformed into bearers of possible solutions to the classic sculptural problem of energy growth within a closed volume, which we have been encountering for a long time as the central plastic theme of his works. The seemingly minimalist staging of the presentation of this cycle fails – and it does not seem to be its goal either – to neutralize the fact that it is only one of a series of possible and almost accidental formations of independent sculptural entities connected by the same plastic process, which firmly and unequivocally adhere to the concept of traditional sculptures. The initial historical reference is additionally complicated by the variation in the proportions of the two-part structure of each element of this ensemble, which opens up the possibility of numerous, ambiguous interpretations of the mutual relationship of its components (relationship between sculpture – pedestal, column – column base, etc.), as well as the very discrete manual processing of the surface of the volume, opposite to the raw materiality and anonymity of minimalism. It is, therefore, a kind of and undoubtedly anecdotal persiflage of minimalist poetics, i.e., the previously mentioned type of conscious superficiality, which negates and ironizes stylistic paradigms by offering resistance to more complex theoretical explanations, and provides preoccupation with an eclectic, witty play with the recent history of the media as its fundamental virtue. On this occasion, it should be interpreted that way – that is, as a valid proof of Bogdanić’s relaxed attitude towards both contemporary art and his position on today’s art scene, just as the undoubted (auto)irony of this sculptural project should be accepted as a sign of his self-awareness and full artistic maturity. 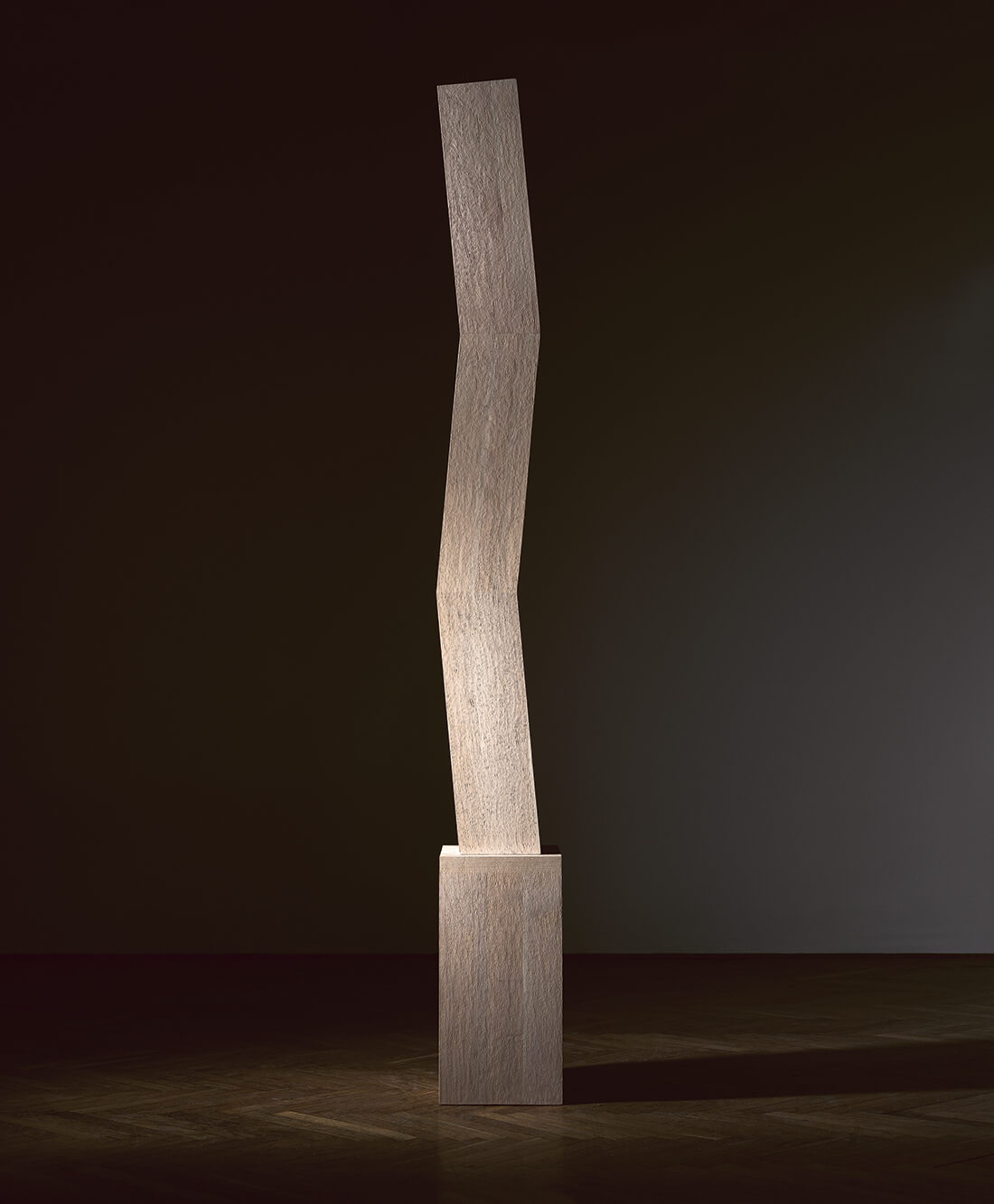 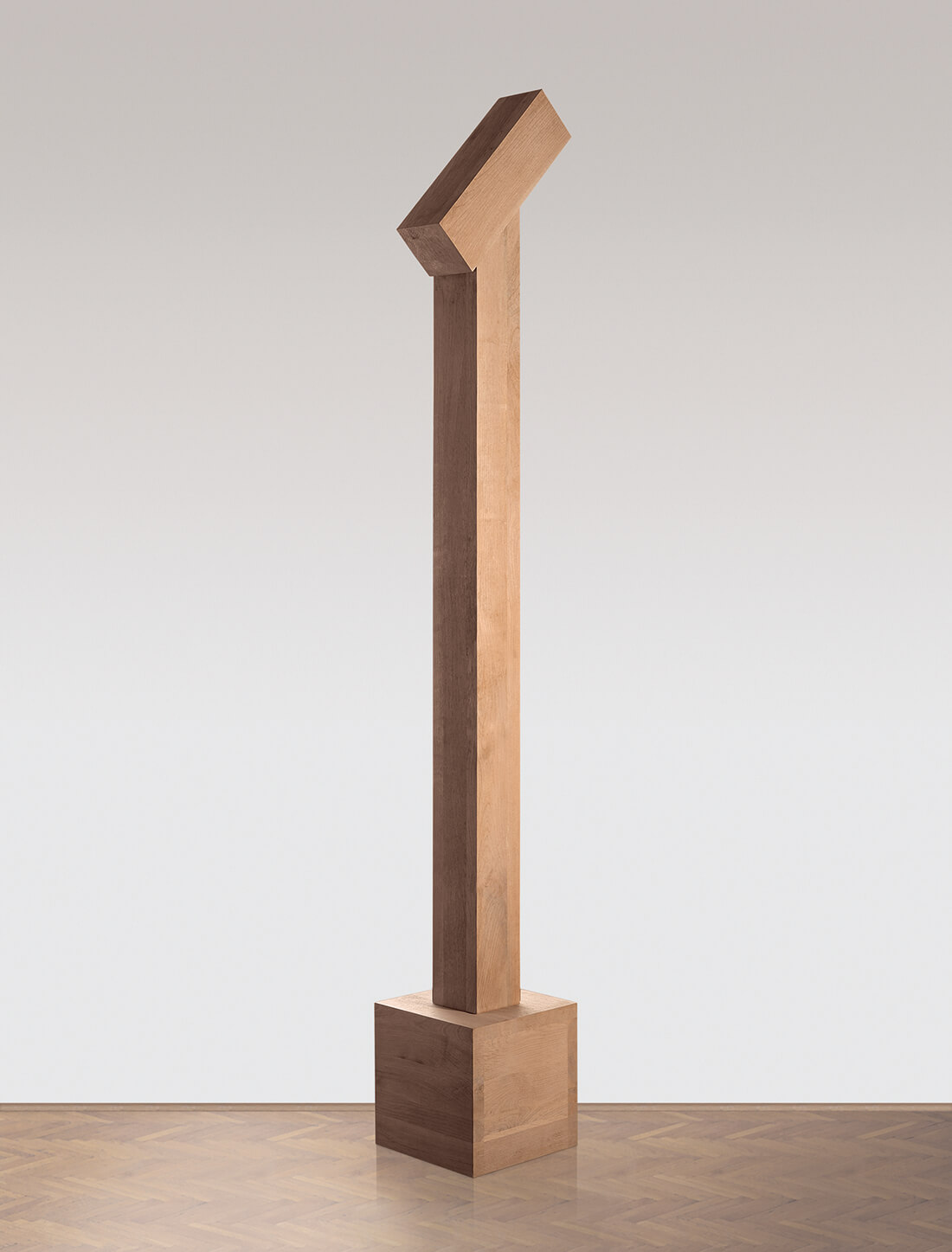 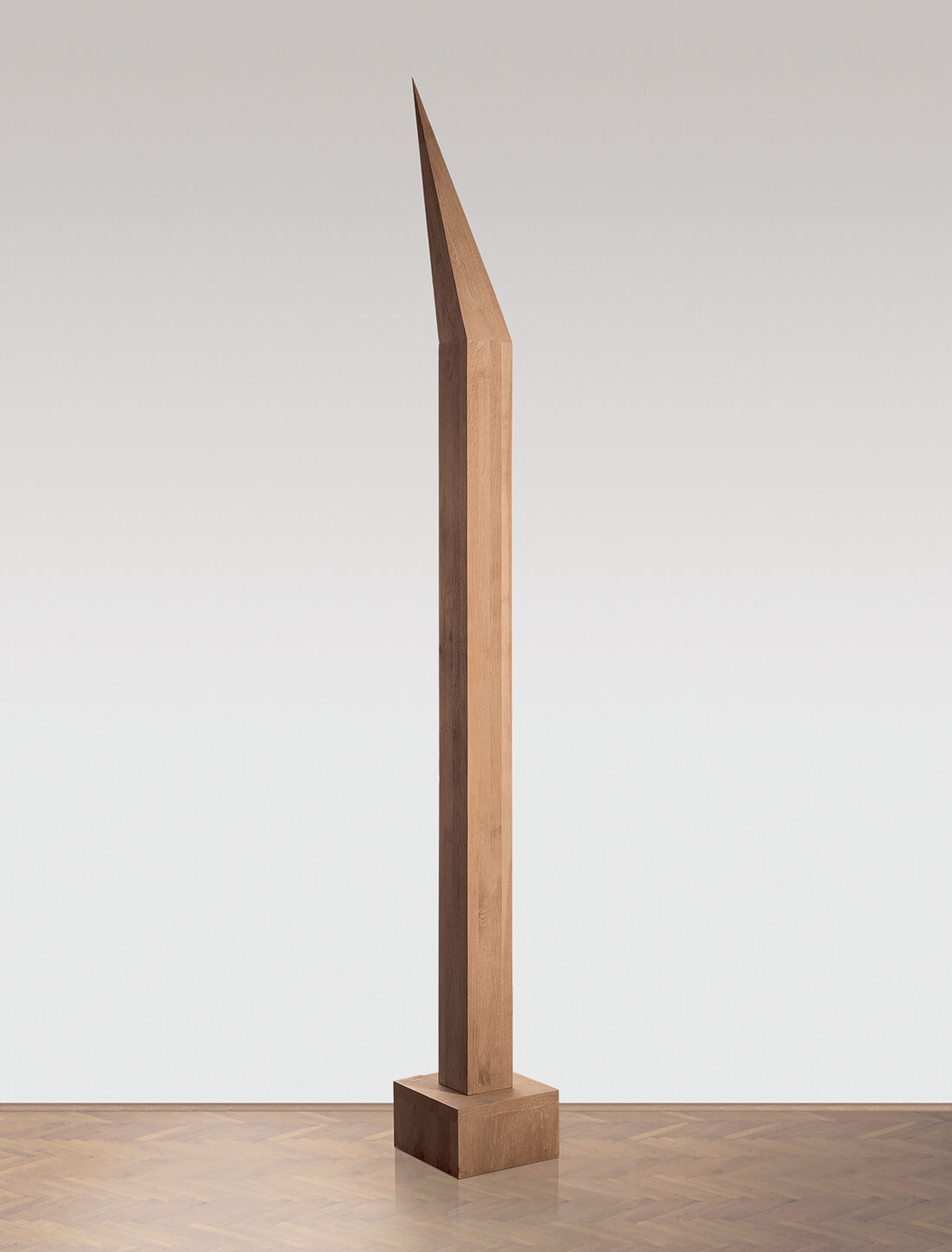 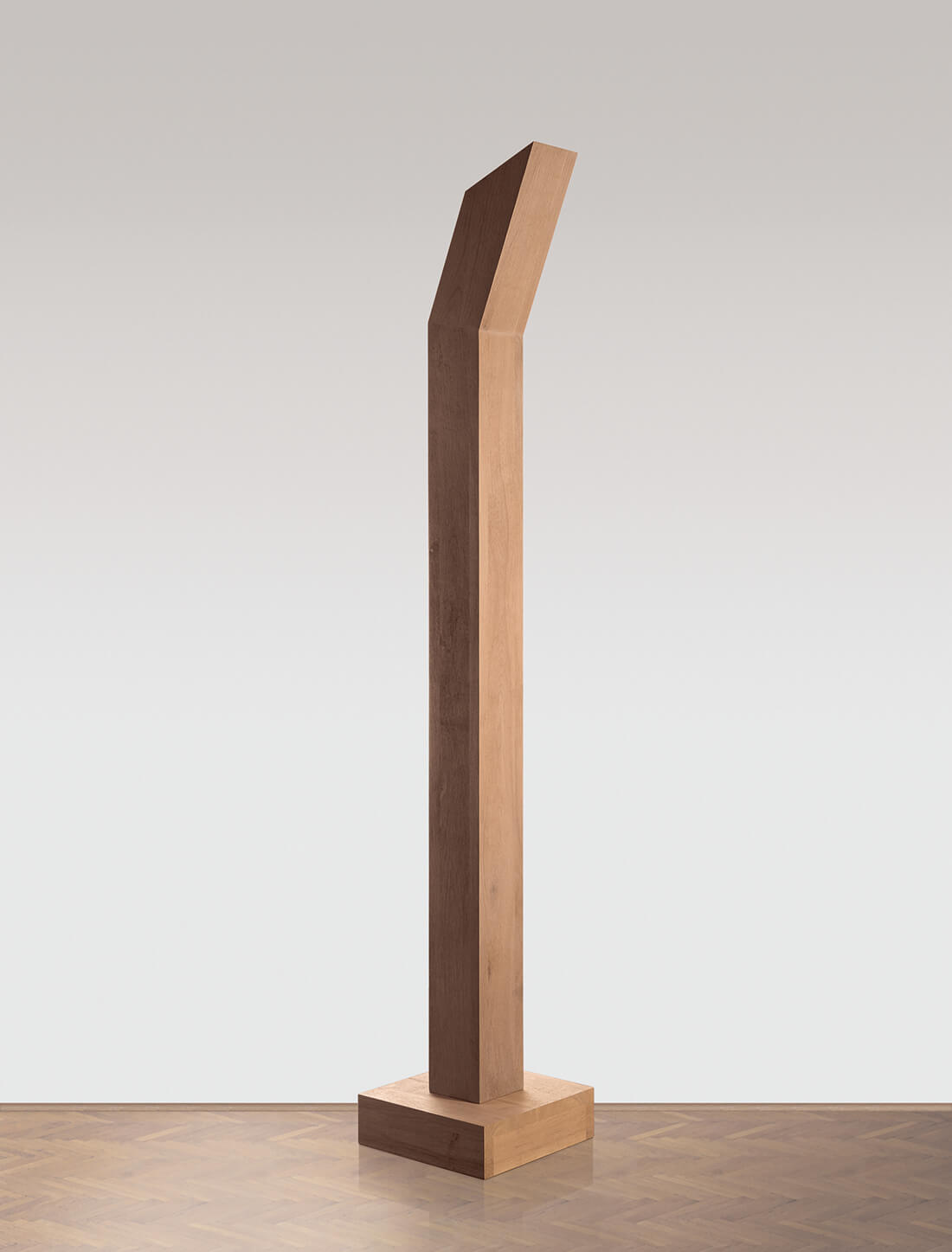 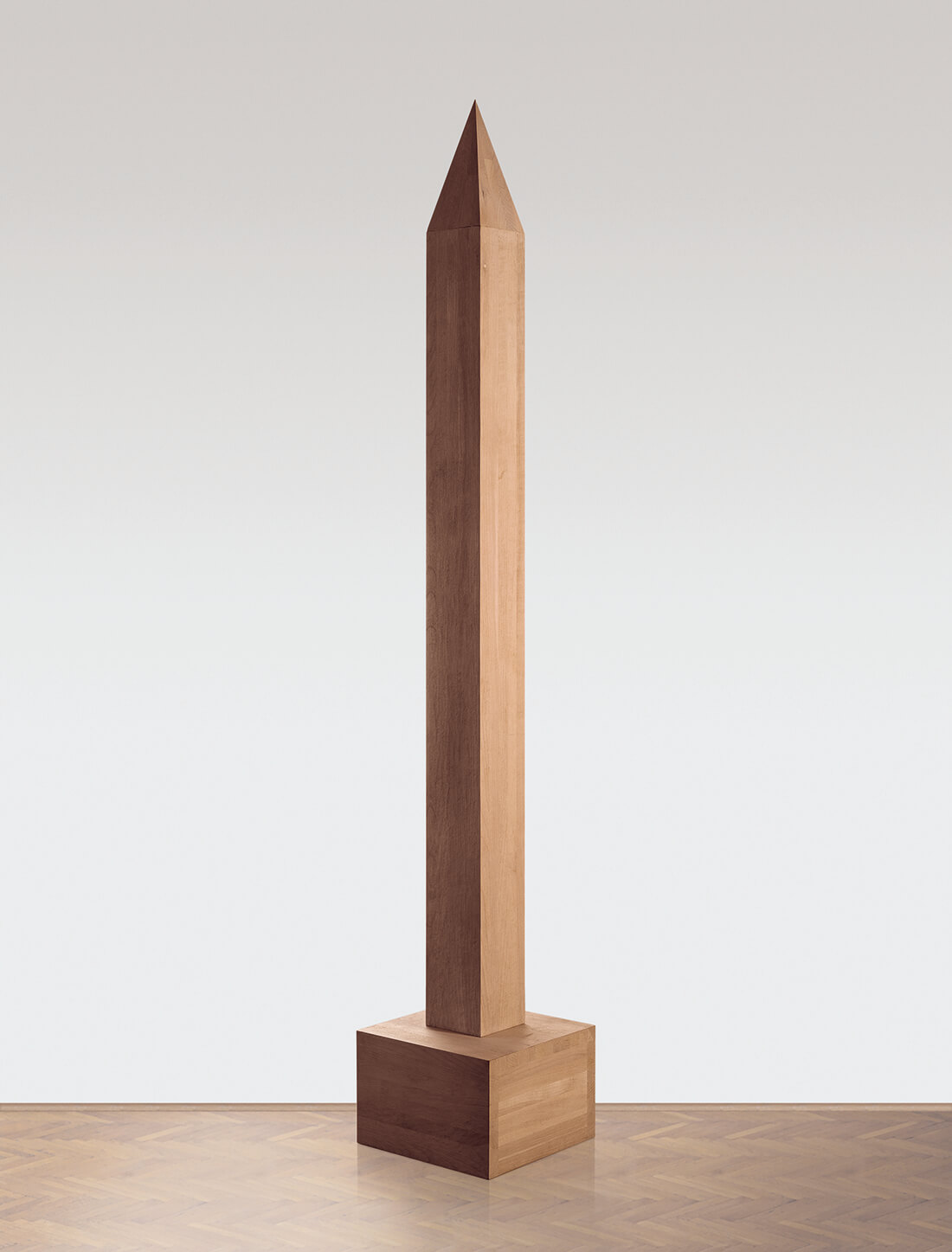 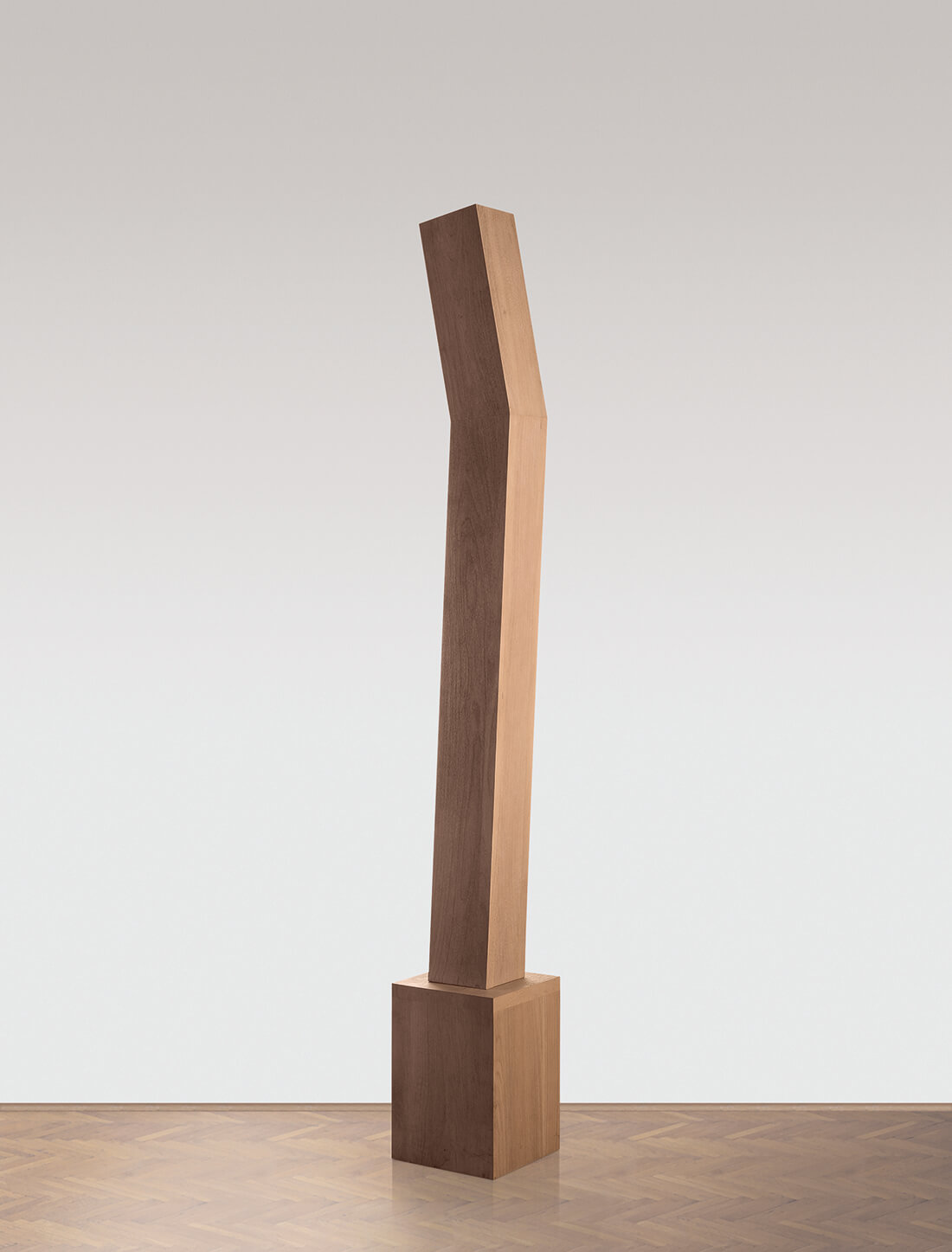 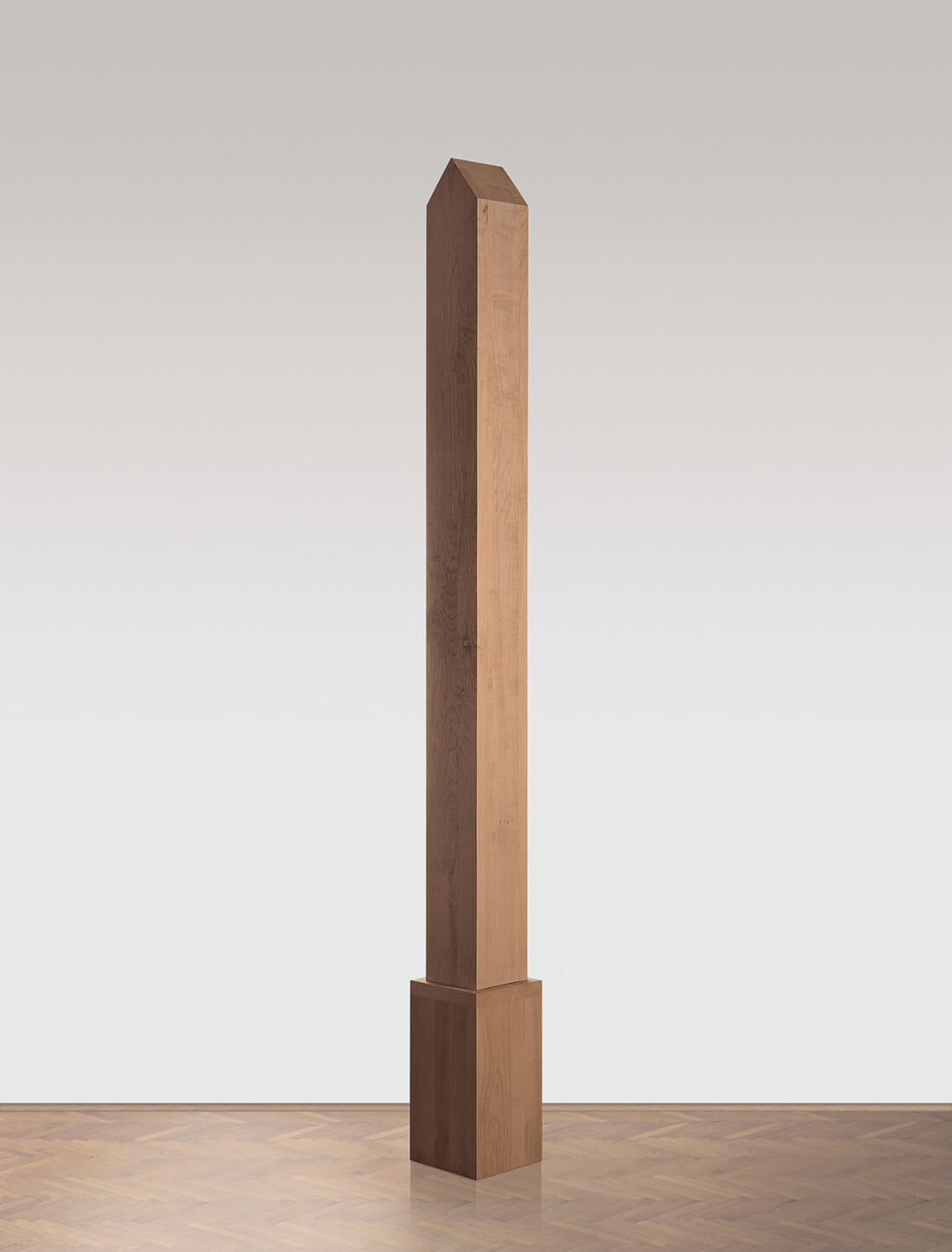 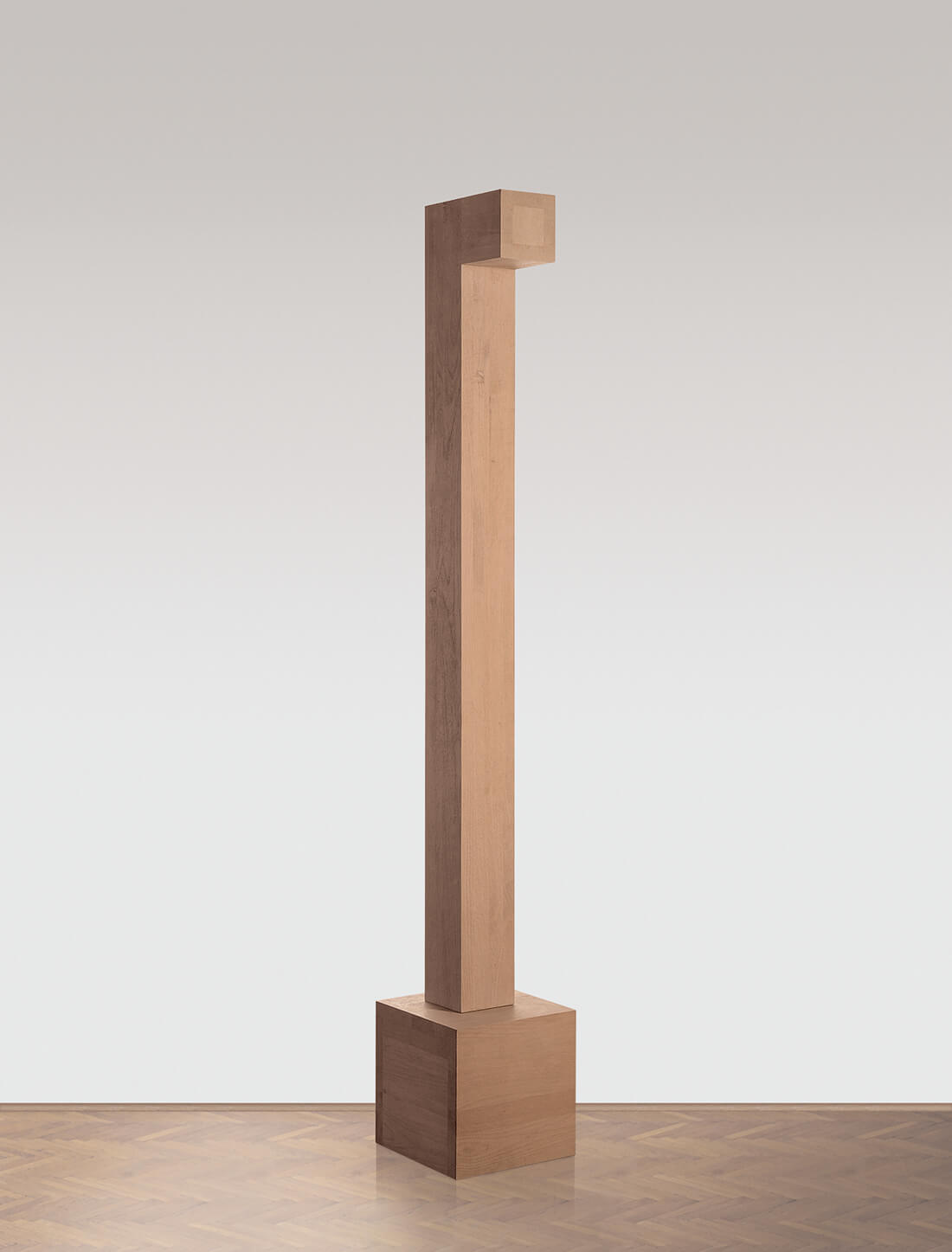 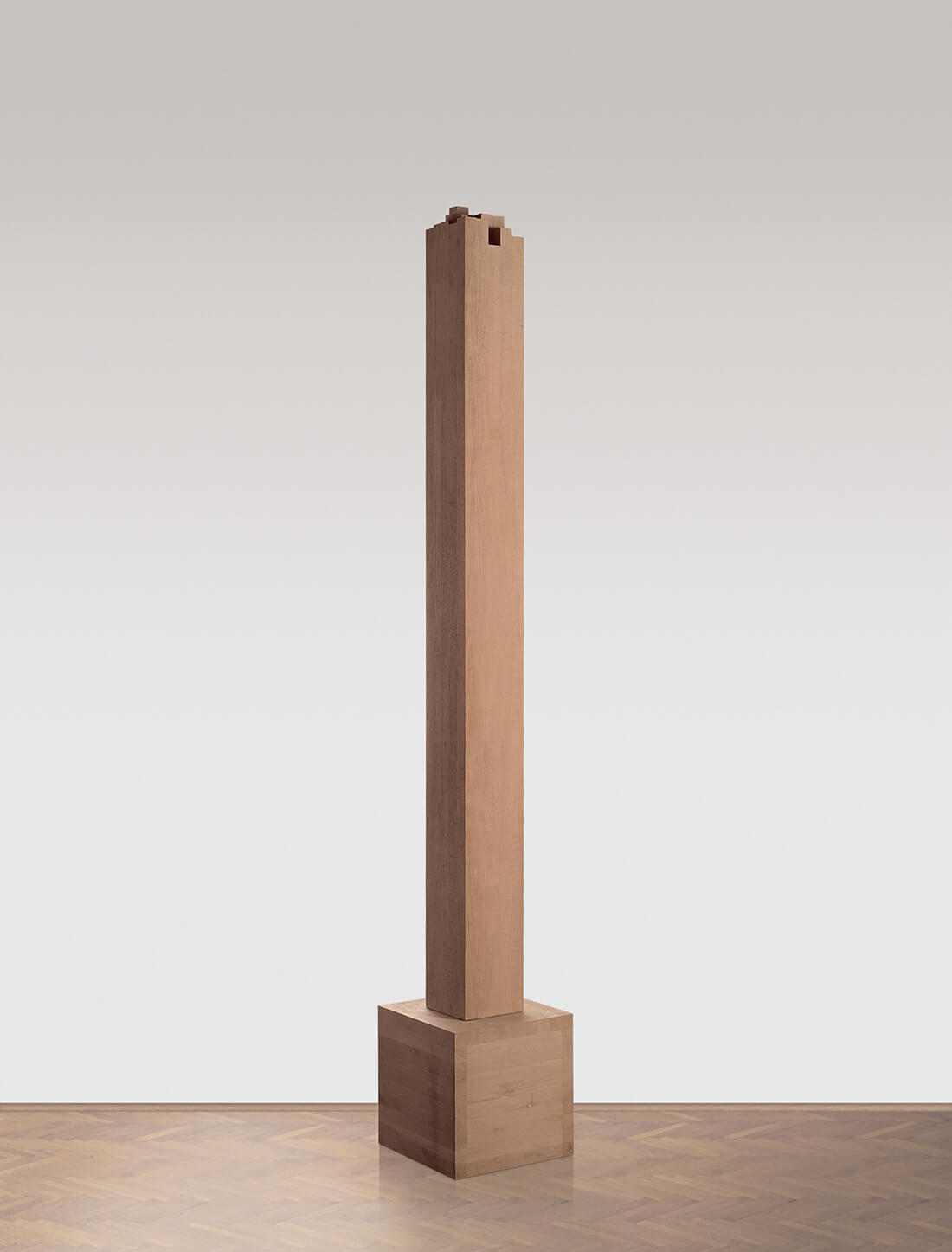 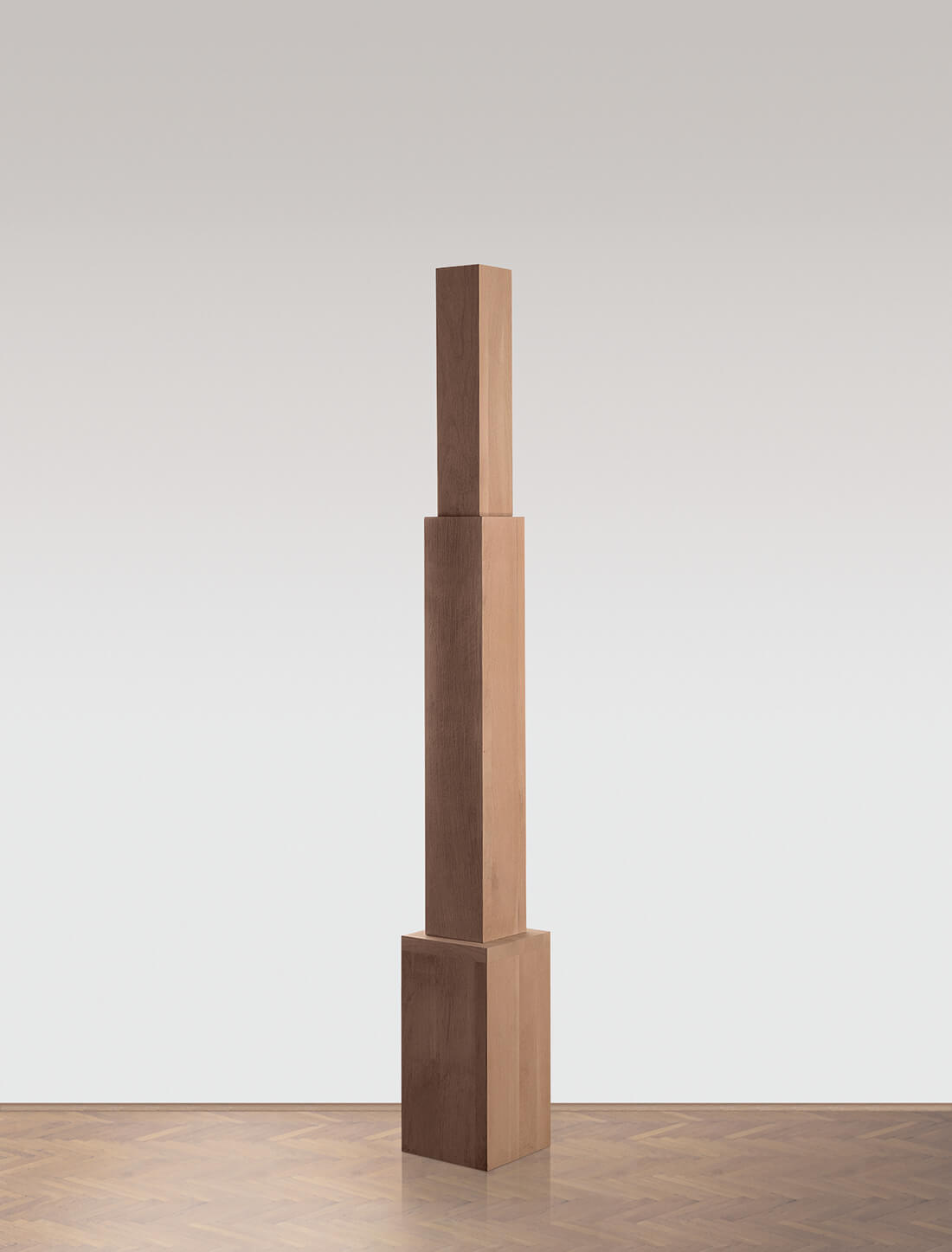 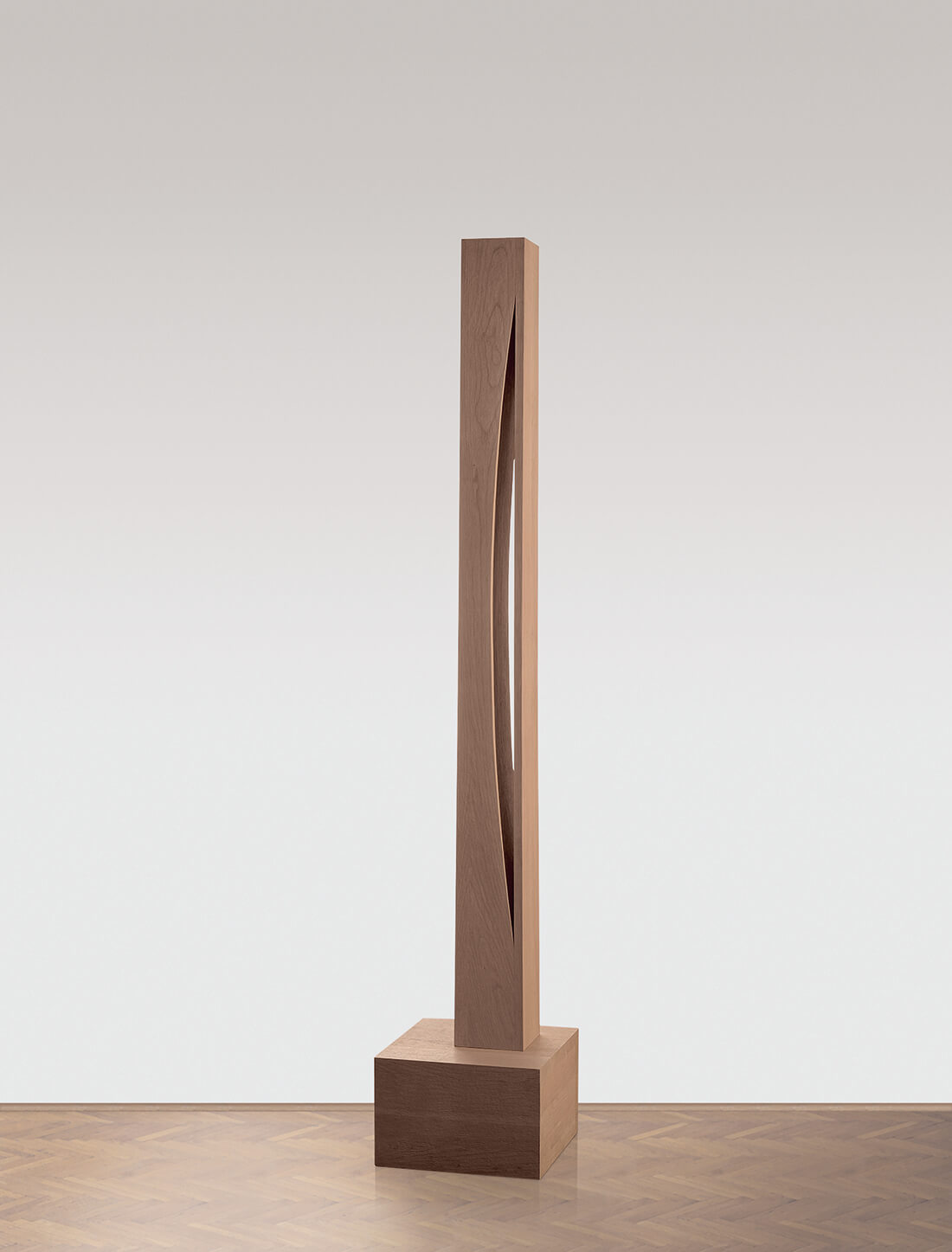 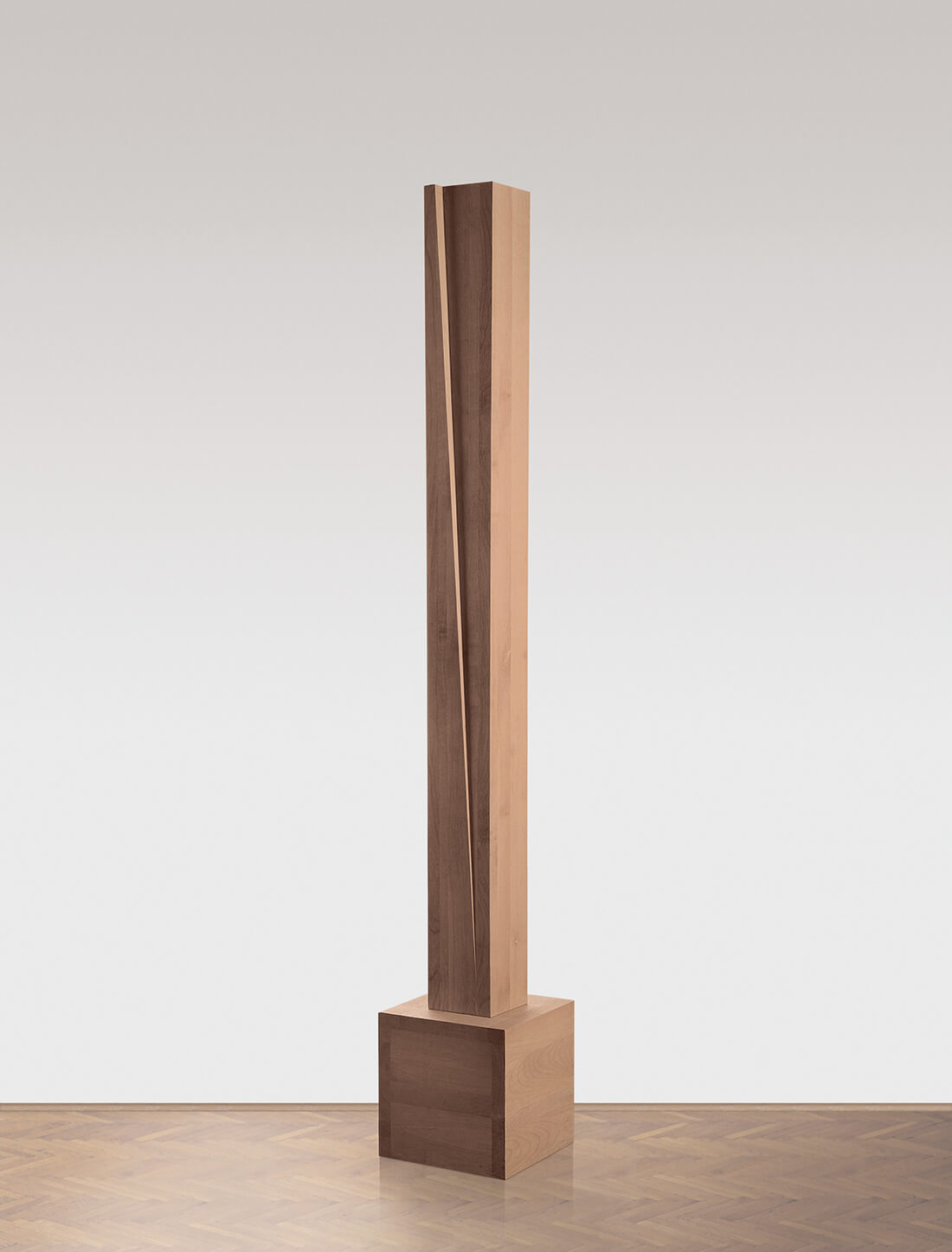 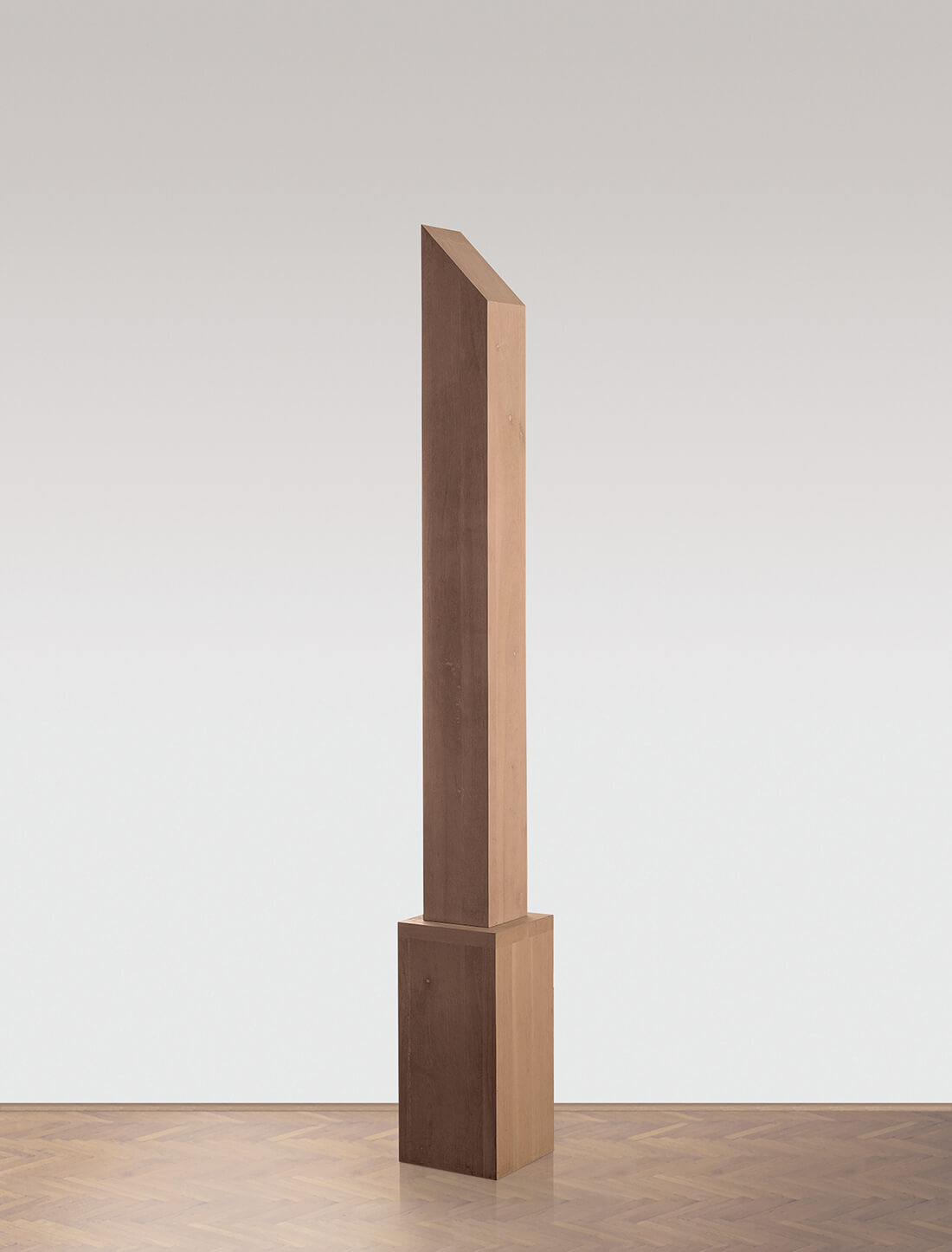